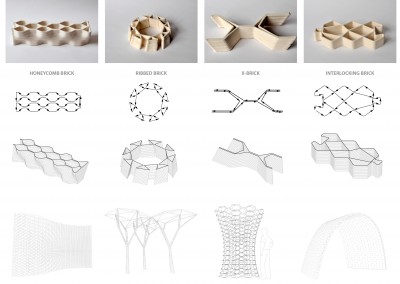 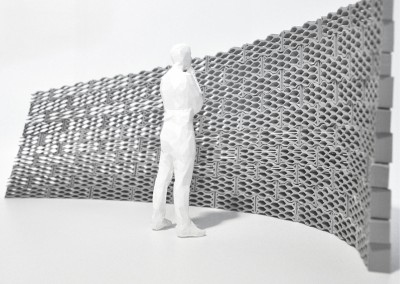 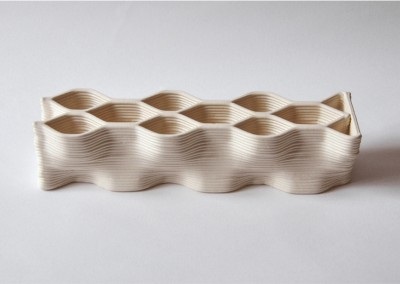 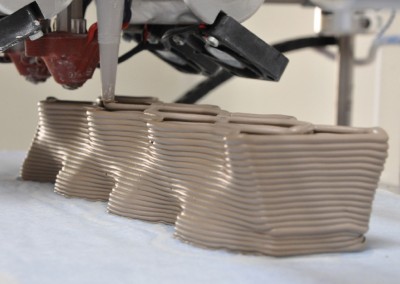 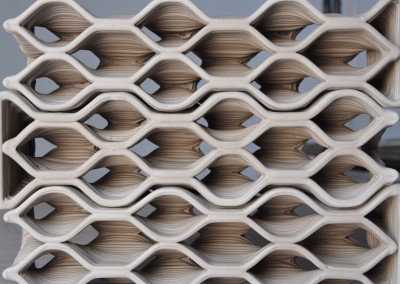 Building Bytes is an ongoing research project looking into digitally fabricated building blocks. While several large scale 3D printing projects are currently being developed, this research examines the potential of using small scale, accessible technologies to continue the long tradition of using bricks in architectural applications. Bricks are an ancient building component and their fabrication has seen several innovations throughout history; however it has consistently relied on a system of moulds or extrusions that produce the same shape hundreds, or thousands, of times. Building Bytes is an exploration of a new tool for brick fabrication: 3D printing. This technique does not rely on moulds, but rather prints each brick individually, allowing users to fabricate complex forms within which each brick can be unique. The initial challenge of the project was to reconfigure a desktop 3D printer to print with ceramics. The plastic extrusion system (print head) was replaced with a bespoke one that used air pressure, while the existing x,y,x gantry remained (Image 2). The final printing material was derived from a slip cast recipe of earthenware ceramics, which is commonly used for casting moulds, and was stored in reusable plastic cartridges. Various recipes were tested to determine the optimal viscosity, drying time and shrinkage of the mixture. The ceramic mixture was extruded from the plastic cartridge through a thin nozzle (print head) using air pressure. The speed of the extrusion was controlled by adjusting the pressure, which needed to be consistently maintained throughout a print. The bricks were printed with a continuous extrusion; material flowed from the print head without stopping and starting, following a series of vertically stacked printing paths composed of polylines. The goal for each polyline was to create an unbroken path that was both structurally stable and time efficient. Each brick required approximately 15-20 minutes to print and after printing, the bricks were air dried for one day (and then fired in a kiln.

The Building Bytes brick designs were developed using a parametric design software, Grasshopper. The initial part of the Grasshopper definition involved scripting an overall form of the application (e.g. wall screen), by inputting the design parameters of the desired structure. This form was then subdivided into modules (bricks) that could be fabricated by the 3D printer. The final part of the Grasshopper definition was a custom script that translated the desired 3D model into g-code. G-code is the programming language that is read by 3D printers, communicating the relevant X,Y, and Z points and the speed to travel between those points. As a result, a master Grasshopper script included all the information needed for a brick, from the design and structural data to the fabrication code and a simulation of the printing process.

Creating a direct link between the digital models and physical tests was essential for this project, since the printing process, in combination with the material, were highly experimental. Optimal fabrication standards could only be determined through several physical prototypes. The following factors were examined: extrusion (flow of material), speed of printing, material viscosity, material slump, amount of layer overhang, stability during printing, and layer height

Building Bytes highlights new opportunities for ingenious and adapted brick designs. For example, bricks can be designed with interlocking joints and different three-dimensional profiles on each façade. Building Bytes also offer the possibility of incorporating necessary electrical or mechanical infrastructure within a brick or engineering each brick’s strength to correlate with its placement within a wall. Four brick types were designed to test and demonstrate the design potential of this fabrication system and its applications in interior and exterior architecture. Along with full scale prototypes of a single brick and stacked aggregations of 15-30 bricks, scale models of potential final applications were produced to visualize and communicate the design intent.

Honeycomb Bricks are modular and can be stacked in three different orientations, allowing for flexibility. They are also very stable during the printing process and in the final application, due to their intricate interior structure. The potential applications for this type of brick include interior and exterior privacy or sun screen walls.

These prototypes are an exploration into the use of interlocking brick joints in wall structures. The interior bracing provides stability, while the exterior can expose the structure (as in the prototype) or be clad in another texture (which is integral to the brick design).

Designed for column applications, Ribbed Bricks have a distinct outer surface that is both structural and ornamental. The material stability while printing drives the unique outline, which can be designed any number of ways with no increase in fabrication complexity. Each brick in the column prototypes is unique, allowing for a twisting, narrowing profile.

Building Bytes is an ongoing project and there are several current lines of research which include; testing new materials, investigating structural integrity, improving the fabrication system, developing new joints and connection details between bricks, and exploring other design applications.