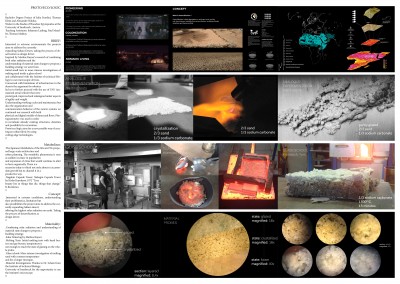 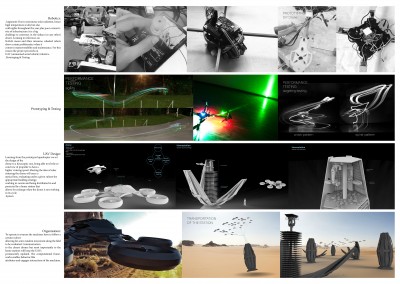 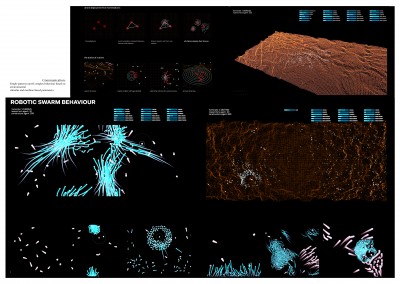 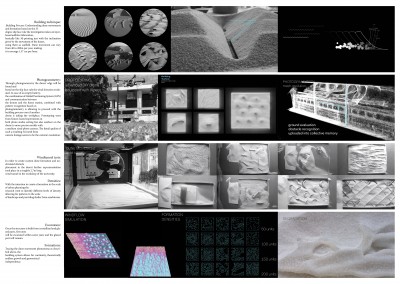 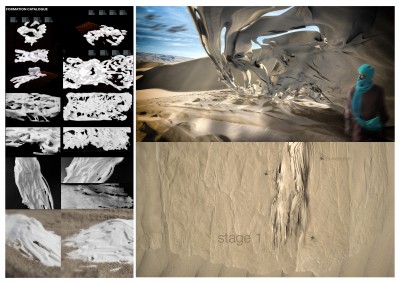 Interested in extreme environments the projects aims to address the currently expanding Sahara Desert, taking the process of desertication as design driver. Inspired by Markus Kayser’s research of combining both solar radiation and the understanding of material state change to propose a building strategy we went from initial small tests to more intense investigations of melting sand inside a glass school and collaborated with the Institut of technical Biology to use microscopic devices. Concerned with limitations of infrastructure in the deserts the argument for robotics led us to further proceed with the use of UAV (unmanned aerial vehicle) that were prototyped, improved and redesigned under aspects of agility and weight. Understanding working cycles and maintenance but also the organization and communication behavior of the swarm systems we continued our research with both physical and digital models of dunes and flows. Photogrammetry was used in order to reevaluate already existing structures, densities and possibility for excavation. Proto/eco/logic aims for a new possible way of creating an urban fabric by using cutting edge technologies.

.The Japanese Metabolists of the 60s and 70s proposed large-scale architecture and urban planning. The metabolic phenomena is seen as sudden increase in population and expansion of cities that would continue to alter in form organically. There is a necessity today to think not only about to accomodate growth but to channel it in a productive way.
.Nagakin Capsule Tower: Nakagin Capsule Tower by Kisho Kurokawa 1972 “True beauty lies in things that die, things that change.” K.Kurokawa
–
Concept:
.Interested in extreme conditions, understanding their problematics, limitation but also possibilities the project aims to address the currently expanding Sahara desert, offering the highest solar radiation on earth. Taking the process of desertification as design driver. + Context
–
Materiality:
.Combining solar radiation and understanding of material state change to propose a building strategy.
.Solar Sintering by Markus Kayser
.Melting Tests: Initial melting tests with hand burner and gas burner, temperature is not enough to reach the state of glazing on the whole probe.
.Glass school: More intense investigation of melting sand with constant temperature and for a longer timespan.
.Material Investigations: Thanks to Dr. Schatz from the Institute of technical Biology, University of Innsbruck for the opportunity to use the institute’s microscope.
–
Robotics:
.Argument: Due to enormous solar radiation, hence high temperature at day but also cold nights throughout the year plus poor connectivity of infrastructure it is a big challenge to construct in the Sahara (or any other) desert. Looking to references on NASA’s moon and Mars missions, wheeled robots show certain problematics when it comes to maneuverability and maintenance. For this reason the project proceeds on UAV (unmanned aerial vehicle) robotics.
.Prototyping & Testing
–
UAV Design: Learning from the prototyped quadcopter we set the design of the drone to a hexacoptic one, being able to tilt the second row of propeller to have a higher cruising speed. Meeting the idea of solar sintering the drone will carry a optical lens, evaluating under a given ruleset the appropriate building strategy, working in swarm and being distributed in and protected by a home station that allows for recharge when the drone is not working in its cycle.
.System
–
Organisation: To operate in swarms the machines have to follow a certain ruleset allowing for semi-random movement along the field to be evaluated. Communication to the closest drones but most importantly to the home stations will keep the UAVs permanently updated. The computational frameworks enables behavior-like attributes and engages interactions of the machines.
–
Communication: Simple patterns unveil complex behaviour based on environmental stimulus and machine-based parameters.
–
Building technique:
.Building Process: Understanding dune movements and formation based on the 35 degree slip face rule the investigation takes on layer-based additive fabrication, basically like 3d-printing just with the inclination given by the movement of the dunes, using them as scaffold. Dune movement can vary from 40 to 200m per year, making it in average 1,37 cm per hour.
.Photogrammetry: Through photogrammetry the dunes’ edge will be found and based on the slip face rule the wind direction evaluated. In case of an empty battery, the combination of Global Positioning System (GPS) and communication between the drones and the home station, combined with pattern recognition based on photogrammetry is allowing to proceed with the building process even if another drone is taking the workplace. Prototyping went from Kinect-based experiments in both photo studio setting but also outdoor on the drone to more precise models with a medium sized photo camera. The detail quality of such a resulting 3d-mesh from camera footage seems to be the camera’s resolution.
.Densities: With the intention to create a formation in the scale of urban planning the research went to identify different levels of density allowing for patterns in the scale of landscape and providing shelter from sandstorms.
.Windtunnel tests: In order to create custom dune formation and understand obstacle placement in the desert further experimentation took place in a roughly 2.7m long wind tunnel in the workshop of the university.
.Excavation: Once the structure is built from crystallized and glazed parts, first ones will be excavated within some years and the glazed part will remain.
–
Formations: Tracing the dune movement phenomena as described above, the building system allows for continuity, theoretically endless growth and geometrical independency.
–
Final statement: Our intention is to create the most essential architecture, to provide shelter and create a pre-societal habitat. Via surface greening over decades the possibility to achieve biomass is the starting point for further desert greening.