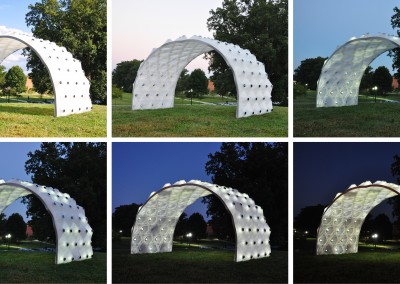 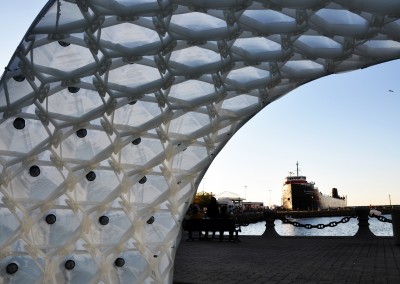 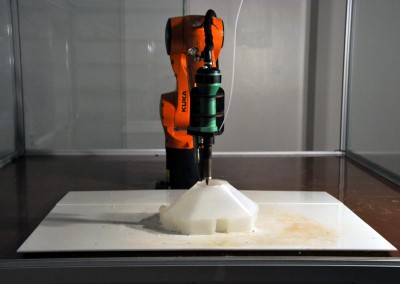 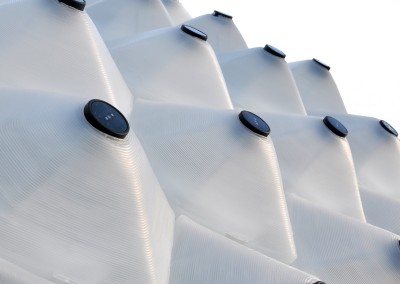 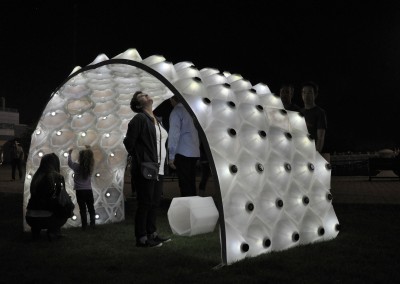 The Solar Bytes Pavilion is an experimental structure that highlights a potential for architecture, where buildings are fabricated using new techniques (3D printing), incorporate smart technologies (light sensors) and are powered by renewable energy sources (solar power). Charging during the day and glowing at night, the solar powered pavilion reflects sun exposure over the course of a day.

The pavilion is constructed out of 94 unique modules or “bytes” (digitally designed and fabricated building blocks) that each have an integrated solar powered LED, allowing the pavilion to charge during the day and glow at night. The modules were 3D printed with translucent plastic, allowing the structure to filter sunlight during the day and create a uniform glow at night. The light effect was enhanced by the use of interlocking, snap-fit joints that reduce the visual division between each module and allowing the arch to be self-supporting.

The overall form of the Solar Bytes Pavilion follows the path of the sun, spanning from east to west to maximize solar exposure. Each solar cell acts independently, capturing and storing energy, as well as sensing light levels, for each individual LED. This creates a recording of the sun’s exposure over the course of the day that is then reflected at night as the LEDs light up. For example, if it is cloudy in the morning and clear in the afternoon, the pavilion’s east side will be illuminated for a shorter period of time than the west side, reflecting those environmental conditions. The pavilion served as a shading device during the day and a beacon at night along the lakefront during Ingenuity Fest in Cleveland, Ohio.

The modules were 3D printed using a 6-axis robot arm in the Robotic Fabrication Lab at in the College of Architecture and Environmental Design at Kent State University. A DOHLE hand welding extruder, the Mini CS, was attached to the robot arm and used as the 3D print head using a FDM style printing process.