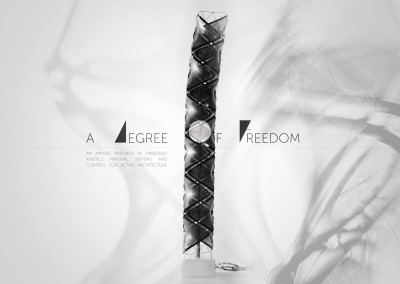 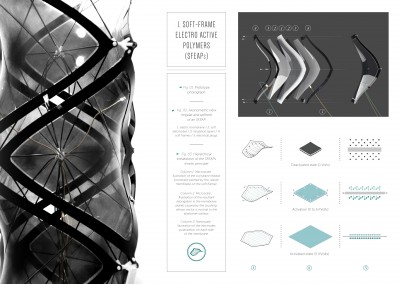 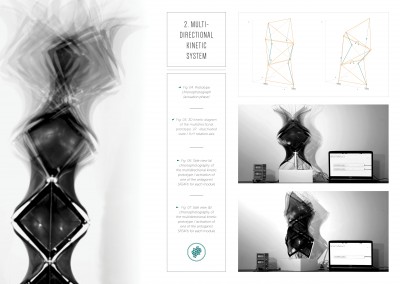 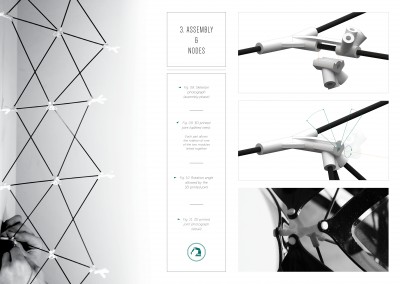 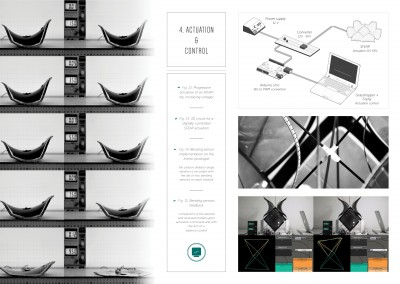 A DEGREE OF FREEDOM

An Applied Research in Embedded Kinetics Material Systems and Control for Active Architecture.

Since the end of the XIXth century, architects’ spatial desires of flexibility, modularity, adaptability, modulation, variation and interactivity have progressively been envisaged via mechanic and dynamic logics. Despite recent innovations in the field of smart materials, the conception of kinetic responsive architecture still remains deeply anchored in mostly conventional and mechanistic approaches that consist of using external machines, mechanisms or robots to transform structures. The use of engines or pistons implies kinetics based on the articulation of rigid parts. Indeed it already exists number of research projects that explore the possibilities of active structures. Most of which entail either tubular structures or faceted surfaces. Shape-changing materials present an opportunity to rethink how kinetics can be applied in architecture, for it to become truly adaptive within its environment. This statement was considered as a starting point and led to a one-year master research project that investigated the application of embedded form-changing material systems, actuators and control for responsive and active architecture. It focused on the development of Soft Frame Electroactive Polymers (SFEAPs) and was aimed at designing and producing an experimental and advanced prototype system whose kinetics digital control would offer new possibilities to envisage what we build as “machines for living”.

SFEAPs are composed of five main components stacked up as layers: an elastic pre-stretched membrane, two conduc­tive layers or soft electrodes, an insulating layer on each side and a soft frame. The elastomer membrane (acrylate polymer) is first pre-stretched up to 400%. It is then coated with soft electrodes (carbon powder or carbon grease) on each side and constrained in a flexible frame (polycarbonate). A thin insulating layer (silicone film) can be applied on the membrane. The conductive layers are connected to the positive and negative plugs for future activation. When the SFEAP is electrically activated, the electrode particles polarize. The membrane is then crushed up and tends to extend, leading to the release of the constraint applied to the soft frame. As a result, the latter, previously constrained, bends back to its original shape.

As far as control is concerned, SFEAP activation constitutes one of the main interests of these shape-changing materials. The amount of deformation is indeed proportional to the applied voltage. The power supply delivers a constant current of 12V that can be digitally controlled and set to any value between 0 and 12V through the pulse width modulation of an Arduino board. This electrical signal is converted to a 0 to 5kV voltage (0,3mA max.) and sent to the SFEAP. As a result, the voltage can be precisely set for various SFEAPs at the same time through an algorithm or directly controlled by a computer.

This light and soft kinetic structure only weights 5 kg and is 1800 Mm tall and 350 mm wide when standing still. Its maximum amplitude of movement is contained within a 1100 mm diameter circle. The prototype is composed of 22 SFEAP elements placed on a thin carbon rods skeleton whose hinge-like joints enable the rotation of its different parts in both directions. Each rotation axis is actuated by two antagonist SFEAPs so that the activation of one would generate a momentum in one direction and the activation of the other would do so the other way. The skeleton axes of rotation are oriented perpendicularly from one module to another, which, added to the possibility of differentiated actuations, leads to a large freedom of movement. Once electrically activated, the SFEAPs ensure the movement and the stability of the whole prototype. Both the actuators and the activated parts, strategically assembled to structurally complement one another, are thus embedded in the same continuous material system. The distinctive aspect of this assembly is the fact that the envelope is activating the supporting structure instead of the opposite.

The balance of this kinetic structure is controlled by a feedback loop that requires the use of an Inertial Movement Unit (IMU) placed on the prototype’s “end-effector”. This electronic chip records the position and the orientation of the extremity of the prototype in real time. These data can then be compared to the input and processed by an algorithm as a new command which thus analyses the difference between the desired movement and the one really achieved by the prototype.

An important part of this project was dedicated to develop the automation of the production process: from the model geometry to the production file export and the robot toolpath generation. Indeed almost every component used in the prototype or for its production resulted from digital fabrication processes: the frames of the SFEAPs are laser-cutted, the electrodes and the silicone insulating layer is sprayed with a 6 axes robotic arm and the articulated joints of the structure are 3D printed.