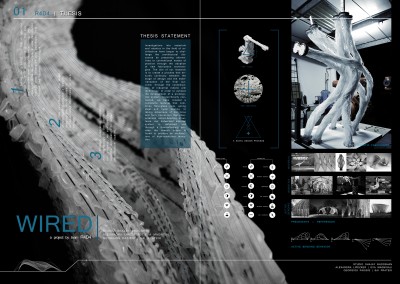 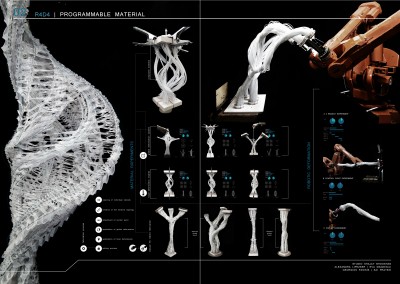 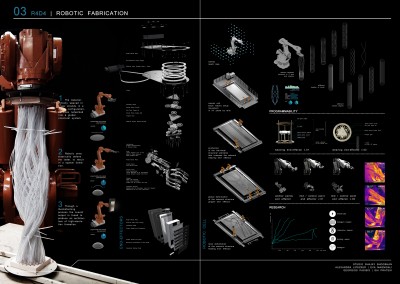 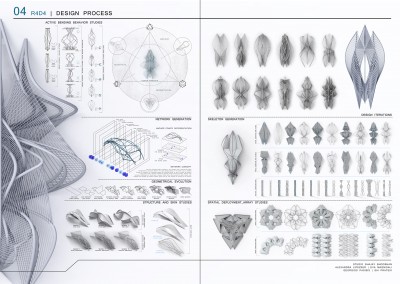 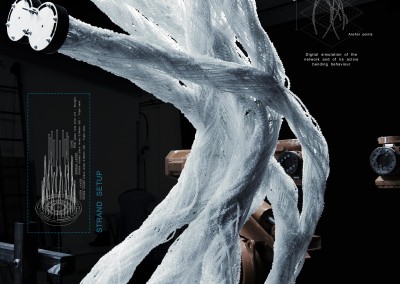 Investigations into materials and robotics in the field of architecture have begun to challenge the architectural discourse by proposing alternatives to conventional modes of practice through the adoption of new fabrication technologies. The aim of our research is to create a process that ensures continuity between the stage of design and the materialization of the final outcome, through the customization of industrial robotic arm technology. In order to achieve the development of a prototypical system, hierarchically connected, we have created a composite material that combines fiber-glass rods, spring steel and nylon coating. In taking advantage of the force and form interaction that characterizes active-bending structures, our networked material system is deformed and through a thermoforming process the overall output is fused to produce an architecture of high-resolution formation.

In our initial material experiments we use nylon reinforced with spring steel. In direct relationship with the reinforced concrete, this technique combines both, the advantages of the compressive strength of the nylon, and the tensile strength of the spring steel. The final result is a composite material in which nylon’s relatively low tensile strength (45 – 90 MPa) is counteracted by the inclusion of reinforcement with steel wires which have relatively higher tensile strength (860 MPa). In the second phase of our material experiments, where the global deformation is applied by robotic arms, we increase the stiffness of our material by introducing Fiber Reinforced Polymers (FRP).

The non-linearity of the formation process of active-bending structures, such as those generated with our material system, have led us to the development of force and materially informed structural concepts, as well as to customized form-finding techniques. More specifically, the material, initially weaved in linear strands in a planar configuration, becomes networked into a global structural system. Robotic arms elastically deform the latter, to result in a spatial formation. Finally, through a thermoforming process, the structure gets fused into the overall formation. The geometric and structural behaviour of the networks are direct results of: material properties, initial setup topology and robotic choreography. Our research aims to investigate form-finding methodologies that satisfy structural, architectural specifications and robotic fabrication constraints.

The process of the experiments includes the following steps:

– Preparation of the framework

– Application of basic Euclidean transformations to the anchor points – translation (x, y, z) / rotation or combination of those.

During this process customized robotic end effectors are used for the fabrication.

The end-effectors of the system were developed to automate the entire process. In essence the three aspects that were considered for customization were: Material Generation, Global Deformation and the Thermoforming Process-Local Deformation. The material is meant to be generated by the weaving end-effector and the robotic movement. As the end-effector weaves the material into one composite strand, the robot places it where it must be for its subsequent transformation. The gripping end-effector relies on the previous information of the material deposition. Once the strands are in place, the network structure is being deformed and the final shape is being defined according to the robotic movement. The heating end-effector targets to locally deform the nylon by melting and setting it, in order to give the architectural construct its final form.

The fact that our research relies on an industrial robotic process and a uniquely engineered composite material made it necessary to develop a design tool that could be customized according to the needs of the fabrication process. Through the observation of the material behavior the research focused on active bending structures that perform in a similar manner. The design system was investigated from three different perspectives : empirically, numerically and geometrically. In the first case, the material’s behaviour and its limitations were tested through physical models. In the numerical approach, digital simulation was used as a tool of exploration of a wide solution space. Finally, the experience and knowledge gained from the aforementioned approaches were a factor of high importance in the development of the third, geometrical approach. In this case, a procedural design strategy was generated, where the actual physical bending behavior of the structure was approximated, based on observations made during the previous experimentation.

After testing individual strand set-ups, a scaled-up networked version of those was fabricated using industrial robotic arms. More precisely the length of the strands was set at 3m and the network structure consisted of 8 strands. The addition of fiber glass rods in this experiment was of crucial importance due to structural performance issues. The design of the network of the 8 strands played a significant role as it determined the constraints that led to the final geometrical configuration after the active bending deformation. The individual strands were produced manually in a flat configuration where the nylon and the spring steel cables were weaved in a specific pattern around the fiber glass rods. The global deformation of the overall setup was predicted through a digital simulation, in kangaroo physics engine, in order to visualize the active bending behavior of the strands due to the robotic actuation. The local deformation of the setup was performed manually with the use of heatguns. The heating of the nylon tubes set the deformation in space and fused the structure in an overall configuration. The setup of each individual strand consist of ten fiber glass rods in a circular array positioned at the core and 50 spring steel wires weaved around them. All of those are coated in nylon tubes which are later fused by heat to solidify the composite strand.