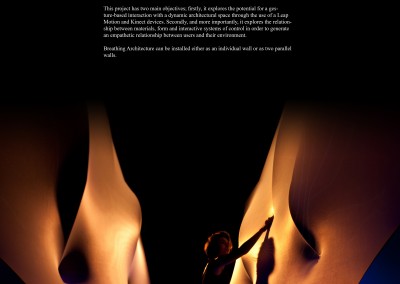 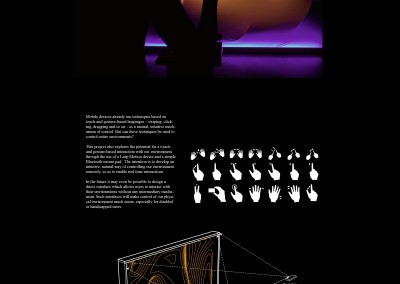 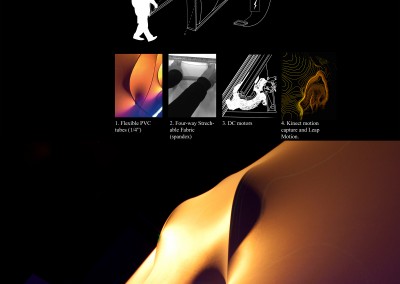 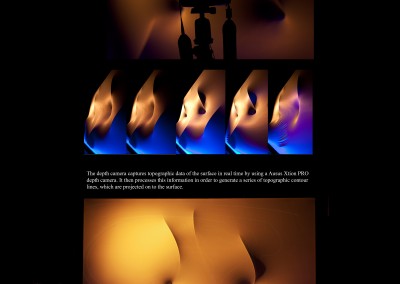 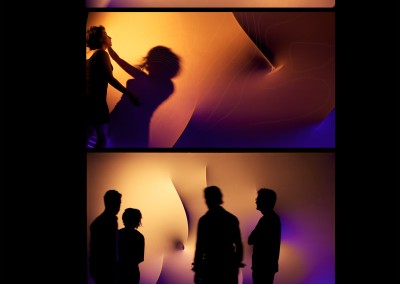 How might we imagine a space that could develop an understanding of its users through their movements and respond accordingly?

This installation is an attempt to address this question through the design of an interactive kinetic installation. This work explores how a physical environment can change its shape in response to user’s movement. Mobile devices already use techniques based on touch-and gesture-based languages – swiping, clicking, dragging and so on – as a natural, intuitive mechanism of control. But can these techniques be used to control entire environments?

This project has two main objectives; firstly, it explores the potential for a gesture-based interaction with a dynamic architectural space through the use of a Leap Motion and Kinect devices. Secondly, and more importantly, it explores the relationship between materials, form and interactive systems of control in order to generate an empathetic relationship between users and their environment.

Breathing Architecture can be installed either as an individual wall or as two parallel walls.

The installation consists of wood, stretchable fabric and PVC pipes control with Arduino micro-controller connected to a Leap Motion. The Leap Motion recognizes specific gestures, which will control several DC motors to operate several types of movement into the surface.

In a way, audience generate various physical movement of the wall surface by their hand gesture while the new surface data information is processed and projected on to the surface. What is interesting here is the fact that projection and physical movement are locked into a feedback loop.